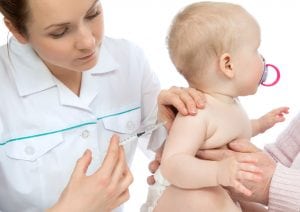 Due to incomplete vaccination coverage thought out the UK, diseases such as whooping cough, diphtheria and meningitis are predicted to rise once more. London having the lowest MMR vaccination rate at just 83%.

A coverage of 95% of the population is necessary to prevent outbreak.

In 2017 based on data pulled from 2014-2016, the WHO (World Health Organisation) declared that the UK had eliminated measles. Unfortunately a status we have not managed to maintain due to an increase in the number of confirmed measles cases in 2018.

Steadily over the last 5 years, we have seen a significant drop in vaccinations given in the UK and Europe. This is thought to be a consequence of fear and false news surrounding the side effects of the vaccination.

The truth is the MMR is a safe and effective vaccine. It protects against three separate illnesses – measles, mumps and rubella.

As with any vaccination or medication, the MMR can come with side effects which are mild and short lived.

Is the MMR vaccination linked to autism?

In 1998 a British doctor named Andrew Wakefield, made world news when he claimed to find a link between the MMR vaccine and autism.
In 2010, Wakefield’s claims were found to be dishonest, leading him to be struck off and his stories declared fraudulent.

Since then many rumours rooting back to Wakefield’s claims have continued to circulate. Regardless of 9 years of continuous studies which have proven there is NO link between vaccinations and autism.

There has also been studies to prove NO link has been found between MMR and bowel cancer, another claim from Andrew Wakefield.

How do we know there is no link between the MMR vaccination and Autism?

The Wakefield paper provided NO evidence to its claims, yet, continues to be extremely harmful to this day.

Studies have also been performed over the last 10 years to dampen the fears of parents who believe there is some truth behind the claims.

The latest study, when monitoring 650,000 children up until the age of 8, researchers found around 1% of them developed autism.

A rate which is no different to children who have not received the vaccination.

Why is it important for my child to have the MMR vaccination?

The MMR vaccine protects against three major diseases: measles, mumps, and rubella all of which can lead to significant illnesses.

The latest NHS figures show that the number of children receiving both doses of the MMR jab is at its lowest in seven years, which has resulted in the growing of diagnosed cases within communities.

The vaccination is not only safe but essential to the health and wellbeing of our children.

Vaccination against measles has prevented an estimated 20 million cases of illness and 4,500 deaths since 1968.

Unfortunately those numbers will decline within the next coming years if something is not done now.

Make sure you and your family are protected.