February 1st brings us a whole month of LGBT education on lesbian, gay, bisexual and transgender history, plus the history of gay rights and related civil rights.

How much do you know about the LGBT community?

In the UK we celebrate LGBT History Month during February as it coincides with the abolition of Section 28, which happened in 2003.

This clause (brought in by Thatcher in 1988) banned the “promotion” of homosexuality by local authorities and in Britain’s schools.
Before Section 28 was overturned, teachers could not discuss same sex relationships, libraries were banned from stocking any material which encouraged same sex relationships and any advertisement of gay relationships was also banned.

Understandably, the clause was met with uproar from LGBT activists.

The ‘Stop Section 28’ protest had a colourful turn, with activists invading the BBC Six O’clock newsroom and three lesbians, known as the sexual avengers abseiling from the public gallery of the House of Lords. In Manchester over 20,000 people marched in angry protest of Section 28 and the world famous Sir Ian McKellen join the battle by announcing his sexuality on BBC Radio 3.

Although the battle had been won, the war still rages on, and to this day the effects of mindless decisions are felt in our schools and workplaces.

However we must remember that we have seen a lot of changes, and each battle is one to be celebrated.

1951 – Roberta Cowell was the first trans-woman to undergo and have her birth certificate changed.

1957 – The Wolfenden Committee publishes recommendations that ‘homosexual behaviour between consenting adults in private should no longer be a criminal offence’. These were rejected.

1964 – The North Western Homosexual Law Reform Committee is founded to promote legal and social equality for lesbians, gay men and bi people.
1966 – The Beaumont Society (A trans support group) is founded to provide information and education to the general public.

1967 – The Sexual Offences Act 1967 decriminalises sex between two men over 21 and ‘in private’. HOWEVER it did not extend this law to the Merchant Navy, the Armed Forces, Scotland, Northern Ireland, the Channel Islands and the Isle of Man.

1970 – The Corbett v Corbett divorce case establishes that a person’s sex cannot legally be changed from that which is assigned at birth.

1971 – The Nullity of Marriage Act was passed (same sex marriages were banned).

1972 – The first ‘Pride’ was held in London! And the first ever gay newspaper was founded.

1974 – Maureen Colquhoun came out as the first lesbian Labour MP. Steven Whittle co-founds Manchester based “TV/TS” group; a group for trans people and the first ever Transvestite Transsexual Conference is held in Leeds.

1980 – Sex between two men over the age of 21 ‘in private’ is decriminalised in Scotland and the first ever black gay and lesbian group is formed in the UK.

1981 – The first UK case of AIDS was recorded when a 49-year-old man was admitted into a London hospital. He died ten days later.

1982 – Northern Ireland decriminalises sex between two men over the age of 21 ‘in private’ and after Terry Higgins died of aids, his partner and friends set up the Terry Higgins Trust. (the first ever AIDS charity in the UK).

1988 – Thatcher, introduces Section 28 suppressing gay rights with this homophobic law for the first time new in a century. Sir Ian McKellen rebels by coming out on the UK’s BBC Radio and protests rip through the major cities in the UK.

1990 – Vigils are held in London for 5 gay men who were murdered within months of each other while Manchester and Northern Ireland take on their first Pride and Jersey decriminalises sex between two men.

1992 – World Health Organisation declassifies same-sex attraction as a mental illness, Brighton holds its first ever Pride and Colin Ireland, is sentenced to life in prison after being found guilty of the murder of the 5 London men.

1994 – The UK House of Commons reduces the age of consent for same-sex relations between men to 18, and the Isle of Man fully decriminalises homosexuality.

1998 – Waheed Alli becomes the first openly gay muslim and member of the House of Lords and the Bolton 7 where awarded compensation after the young gay men were convicted of gross indecency.

1999 – A gay pub in Soho (The Admiral Duncan) is bombed by former British National Party member, David Copeland. The attack kills three people and wounds many others.

2000 – Finally, the government lifts the ban on lesbians, gay men and bi people serving in the armed forces and Scotland abolishes Section 28.

2001 – Age of gay sexual consent is lowered to match the consent laws of straight people (16).

2002 – Equal rights are granted to same-sex couples wanting to adopt, and Judges rule that the UK Government should accommodate trans people by issuing new birth certificates and marriage to someone of the opposite gender.

2003 – Section 28 is repealed lifting the ban on local authorities from ‘the teaching in any maintained school of the acceptability of homosexuality’ in England, Wales and Northern Ireland.

2005 – Tougher sentences are bought in for offences aggravated or motivated by the victim’s sexual orientation, or their presumed sexual orientation.
Christopher Cramp and Matthew Roche become the first couple to complete a Civil Partnership in the UK, the day before Matthew lost his battle with cancer.

2006 – The age of consent is equalised and Section 28 is repealed in the Isle Of Man.

2009 – Gareth Thomas a leading Welsh rugby star comes out as gay while David Cameron apologises for the introduction of Section 28.

2010 – ‘Incitement to homophobic hatred’ comes into force in the UK.

2011 – Gay couple Martin Hall and Steven Preddy, won a court battle when the owners of a B&B refused to provide them a double room.

2013 – Marriage (Same-Sex Couples) Act is passed in England and Wales. Tom Daley announces he is gay and the first ever Trans Pride event takes place in Brighton.

2015 – A massive milestone – The US legalises same-sex marriage.

2016 – While the Isle of Man legalises same-sex marriage, 49 people are killed in a LGBT nightclub in Orlando. London gathered to show support for the community overseas with Prince William being seen on the cover of gay magazine, Attitude.

2017 – A posthumous pardon is granted to all gay and bi men who were convicted under pernicious sexual offences laws in the last century which enabled police to criminalise people for being gay or bi and amendments to the Children and Social Work Bill making relationships and sex education (RSE) mandatory in all schools in England and Wales from 2019.

2019 – Stonewall is named gay role model of the year! The BBC has its first ever LGBT correspondent and Wembley hosts its first fixture in support of Stonewall’s Rainbow Laces campaign. 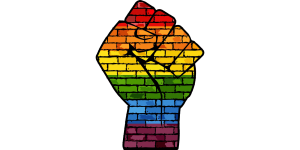 What a way to come!

While many of you may have skimmed over the last decade, you will still notice a massive improvement for the fight to be equal.
We mustn’t forget that there are still places in the world that are stuck in a time warp of ignorance and naivety and all the while we must continue to grow our community and reach out to others that are not as privileged as ourselves.

Here at our London clinic we fully support all communities and welcome anyone in that maybe worried about their sexual health or need extra support. We will always provide you with clear and accurate advice based on current British Association for Sexual Health and HIV (BASHH) guidelines.